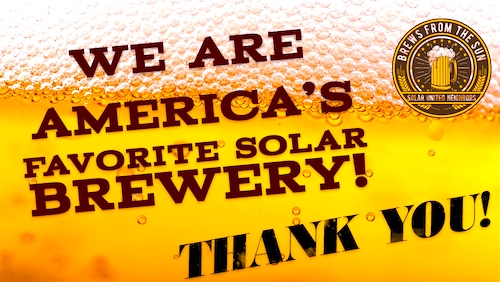 Anyone that loves this blog, loves beer! Nothing like an ice-cold beer on a warm sunny day while tinkering around the yard getting some things done, but not too many things. Beer in one hand, screwdriver in the other, fixing that old light switch off the back patio that the wife has been nagging about for the past year. That’s a typical Saturday afternoon for me, and to be honest, my beers just don’t taste as good when it’s cloudy, overcast, or raining. So why does beer taste so much better when the sun is shining down on you? Well, for starters, the warmth of the sun penetrating your skeletal structure while you guzzle some hoppy IPA action is something to be acknowledged. I love the sun, and I love my beers, so naturally, they go hand in hand when I’m drinking. It’s probably another reason I like to drink at the beach, with the sun shining and the waves crashing, how could an ice-cold beer not taste amazing? Now, what if we were to put the power of the sun into our nectar of love? Aside from the sun playing a vital role in growing hops and any other natural resource a brewery may use in their ingredients, it can also play a major role in powering the brewing operation… yes, I’m talking about solar-powered breweries. What a badass concept for anyone that loves the sun, beer, and giving the planet a little break. You following me? Ok, cool, now check this out.

The brewing process is a long complex timeline that drains a massive amount of power from the grid, and this usage of electricity can ding the pockets of the small craft brewer, so why not go solar, save money on your electric bill, on bringing the price of craft beers down! Genius! At least I think I am, but nobody has ever officially called me that. But I’m not the first to the table with this idea, in fact, breweries around the country have already adopted the solar brewery concept and there are some great beers being made using solar as I type this. Check out these 5 innovative solar breweries that are making a name for themselves in the solar brewery world.

I’m going to start here because I freak’n love their beer and knowing they took their brewery solar makes me a fanboy even more! These guys make one hell of an IPA! Located in Arizona, these guys were voted America’s favorite solar brewery at the Brews From The Sun competition! They beat out 40 other solar breweries and brought the crown home to AZ where the sun shines bright and the brews taste right! Legal Remedy Brewing was the runner up, and they also are making noise in the solar brew movement. I would love to give them a shout out, but I have never tasted their beer – hint, hint – if you read this, please feel free to contact me and I’ll taste your beer.

Back to Mudshark though, congrats to them for making it to the top of our list! It doesn’t hurt that they are solar powered in Arizona, and I happen to love their beer. They are leading the way in solar brewing and should be considered an inspiration for anyone wanting to go solar in Arizona.

Located in California where the sun shines most the time, Lagunitas is blazing the trail as an innovative solar brewery that has embraced solar technology while making one hell of a craft beer. Apparently, they aren’t messing around either, reports suggest that the brewery will be dumping close to FIVE MILLION dollar on this solar project. I must take some credit here, I probably contributed at least $500 dollars to that in 2018. So while they take my money and go solar, I’m spending more money on gym memberships trying to trim this beer gut down I’ve worked so hard to get.

Next up on my list of favorite solar breweries has got to be Stone. First, the Stone IPA was one of the first IPA’s I was really drawn too. It might have been the logo that enticed me to pull it off the shelf at first, it just looked evil, and I like catching an evil buzz! Once I cracked the bottle though, I was hooked, and the Stone IPA slowly became my go-to IPA for at least a year. Fast forward to today and I’m trying all sorts of IPA’s every day (sounds like a drunk) – in moderation of course. Now that I have learned they went solar, they have made my list of El’Favo’s to drink! So what’s the scoop on this solar brewery? Check it out!

The stone brewery is also located in California, and they didn’t mess around when installing solar in 2008. They installed over fifteen hundred photovoltaic panels on their rooftop, and apparently, that’s enough to generate power for over twenty percent of their power needs. Pretty cool! These folks didn’t stop there though, they also offer staff charging stations for electric cars, they have a water reclamation system, and they generate compost from their kitchens. Ok, the fan-boy has risen – can’t wait to visit that brewery!

The Kona Big Wave is a very drinkable beer! I could guzzle a 12’er by the pool any day of the week. They have a crisp taste and go down the hatch rather easily when I’m thirsty. Kona brewery is also in a very solar-friendly place, Hawaii! Another brewery I want to visit in the very near future, this company is awesome, and I’m about to tell you why! Being on an island, you better conserve energy, and this brewery is leading the way with a massive solar system installed. Reports suggest that by adding solar panels they were able to cover about fifty percent of their solar energy needs. That is crazy! A number cool number I read, due to this installation of solar panels on the brewery, over the lifetime of the panels, Kona will have decreased the need for fossil fuel dependency and limited the number of oil barrels shipped to the island by almost 17 thousand barrels. That is crazy, and disturbing at the same time. 17 thousand barrels of oil? I’ve been sleeping under a rock on the whole oil thing, I had no clue that much oil was being imported into an area like this. Scares me to think about how much oil we use on a daily basis. Time to take this thing green!

Another IPA I enjoy and most commonly available at the gas stations I frequent, this brew started out as an only-option purchase and became a favorite of mine over time. It really has a great flavor, I just wish the percentage of the IPA was a little higher. To hear they have taken a major portion of their brewery solar puts a smile on my face. Reports suggest that every year by using solar, they are generating enough power to light up 265 homes in the U.S. every year. That is a heck of a lot of power and it puts things into perspective. Both of their brewhouses use energy-efficient means to produce those fine beers, that alone should be enough for you to want to grab a 6’er on the way home from work today.